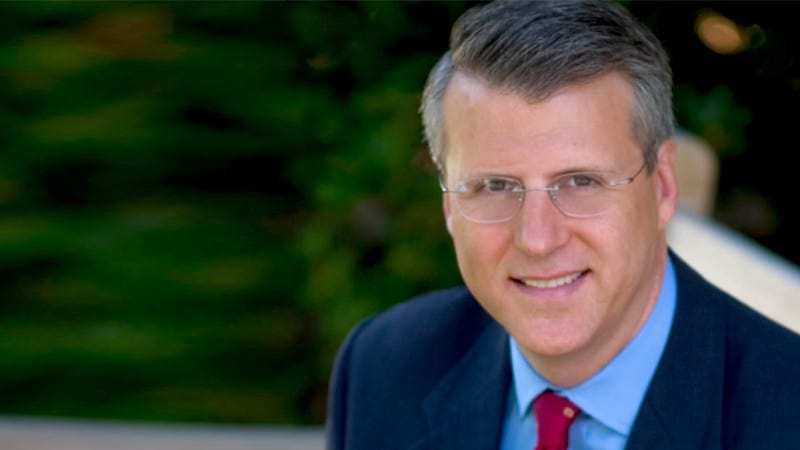 A research fellow at Stanford University’s Hoover Institution, Peter Robinson spent six years working in the White House in the 1980s as speechwriter for both George H. W. Bush and Ronald Reagan. He was the man behind Reagan’s famous Berlin Wall speech, one of the most memorable in modern politics. In his interview show, Uncommon Knowledge, he has had the opportunity to speak with some of the most interesting people on the planet. Mr Robinson chatted recently with Executive America’s publisher Jesse Landry for the Landry.Audio podcast to discuss his time on the staff of the President of the United States.

“It’s not as if speech writing for a president is a civil service job,” Mr Robinson says, discussing the way he found himself with a position in the White House, “for which you train and go through regular entrance examinations and so forth. I got in on a fluke, and that is the way politics works.”

After graduating from Dartmouth and spending two years in the UK at Oxford, Mr Robinson needed a job. After writing to people he thought might be able to help him, he received a reply from journalist William F. Buckley Jr., who put him in contact with his son Christopher, the Vice President’s speechwriter.

“I presented myself to Christopher Buckley, in the summer of 1982. Totally unbeknownst to me, Christopher had put in his notice and was planning to leave in just two weeks, and his replacement, who had been lined up for some time, had just fallen through. So the Vice President’s office needed a speechwriter in a hurry, and I walked in the door.”

Mr Robinson was just twenty-five years old when he joined the White House staff, with a background in student journalism, having written on politics at both Dartmouth and Oxford. The Vice President’s office needed somebody with experience of handling professionals, and Mr Robinson fit the bill.

After getting hired by the President, Mr Robinson took his leave from working for VP George H. W. Bush, who he describes as “one of the nicest men I have ever known,” and began working for President Ronald Reagan. He describes Reagan as a man who, unlike his Vice President, was never satisfied with the status quo.

Mr Robinson remembers Reagan as a complicated man. At times he was genial and warm, attentive to others and determined to put people at ease, especially in the Oval Office. He did this by telling jokes and looking around the room, making everyone feel included. At the same time, there was a noticeable remoteness about the President.

“I heard from a number of sources who knew him in the old days that he had one very close friend in Hollywood. In my experience, I could see only one person whom I would have considered a friend of Ronald Reagan’s, and that was a man who was briefly the National Security Advisor, Bill Clark.”

It appears Reagan only had two very close friends during his lifetime. It was his marriage to Nancy that represented the tightest relationship of his life, and the two were a self-sufficient unit. Politically, Reagan was aggressive. He thought things through carefully, reading in detail about certain ideologies, and had strong conservative convictions.

“Reagan was just right for that moment,” he explains. “Reagan pushed, applied all kinds of pressures, on the Soviet Union, and broke it. You could say it tumbled in on itself, but even at that it was at least in large measure because of external pressures that Reagan, helped by Thatcher and others, applied.”

By the time Mikhail Gorbachev became leader of the Soviet Union in 1985, Reagan was already into his second term. After trying unsuccessfully to play the same old game of nuclear cat-and-mouse at a summit in Reykjavik, Gorbachev had to quickly concede that the Soviet Union needed to change.

Until its collapse in December 1991, the Soviet Union was a country formally committed to a worldwide communist revolution, with part of the country’s written documents mandating it to subvert other nations until communism triumphed everywhere. Mr Robinson is happy to see no sign of this attitude in today’s Russia.

When Reagan delivered his speech at the Berlin wall, written by Robinson, in which he used the famous words ‘Mr Gorbachev, tear down this wall,’ he was telling the Soviet Union that they could no longer use half measures in their movement towards liberalization, upping the ante for the eventual fall of communism.

“Reagan loved giving speeches,” Mr Robinson says, “that was how he was President. Holding meetings, going around to members of congress – he would do that when his staff asked him to, but to him that was the price you had to pay for the central act of governance, which was moving the American people, explaining yourself to the American people.”

Reagan’s background in acting helped him maintain the highest level of public speaking. He was famous for saying, albeit tongue-in-cheek, that he couldn’t see how anyone could be President without having first been an actor. Mr Robinson remembers that he was a master of the technical aspects of public presentation.

“From the time he talked his way into a job as a radio announcer in his early-twenties, through the rest of his career, he was always addressing himself to ordinary Americans. There was a lot going on in his mind [when making a speech]. He would be smiling and waving and acknowledging the applause at the same time that he was in charge of the technical aspects of what was taking place. He was technically very, very adept.”